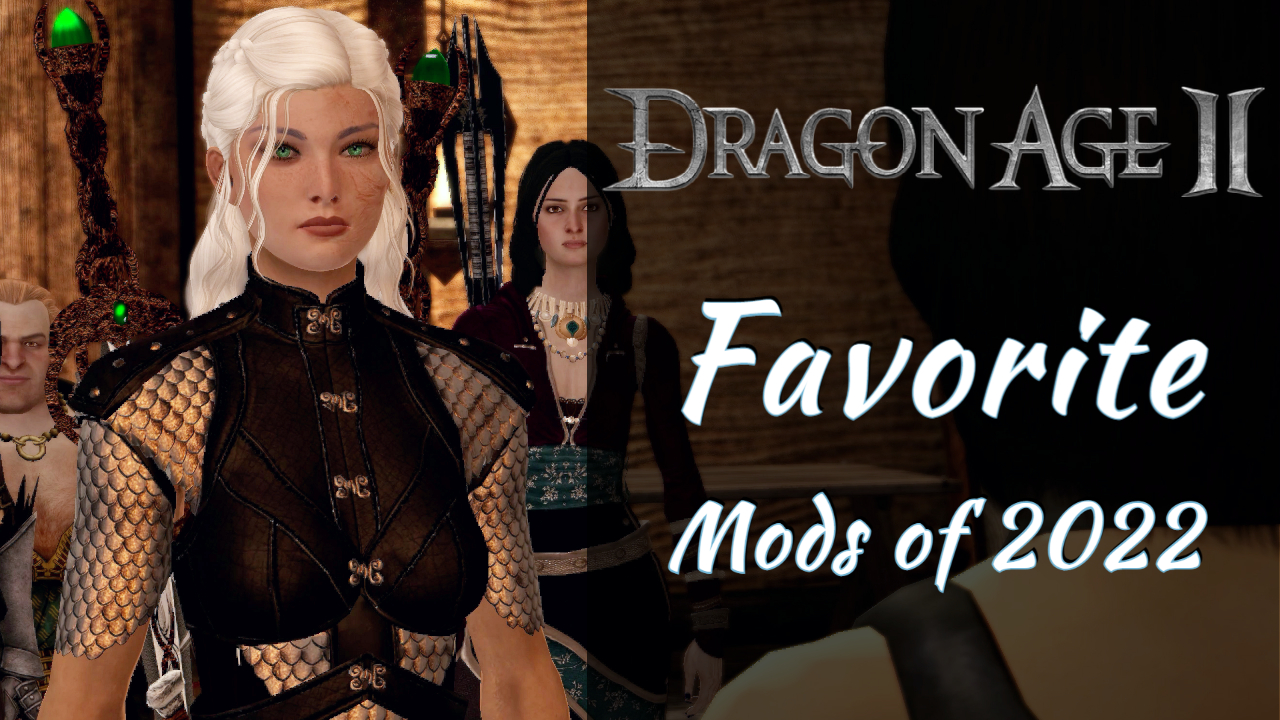 Did I recently re-mod Dragon Age 2 and find a few new mods that I’m in love with? Yes, yes I did — and I’m going to share them with you today! All of these mods are from Nexus mods and will be linked in the blog post!

Cleaner Quickbar is a delightful mod that honestly does one thing and does it really well — it removes that annoying white bar above your quick bar to give it a cleaner, more seamless appearance. As someone who usually hates UI’s overall, this is a must, forever in my load order mod, as it makes my game feel less cluttered, distracting me less from the game itself. 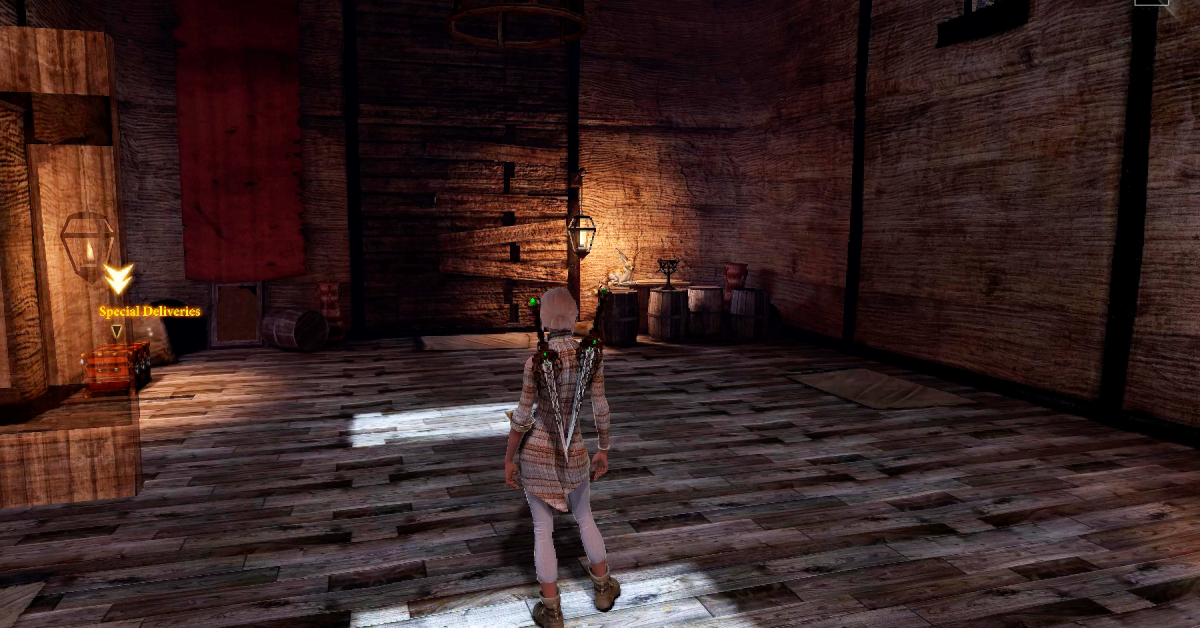 DLC Away – Move DLC items to personal storage | By: Starrarte

DLC Away – Move DLC items to personal storage is so good. It literally will move all the DLC item packs to your personal storage and clear the quest markers out of your inventory — it doesn’t, however, move the promo stuff, so if you have that, it will still show up in there! But the best (and my favorite) reason to download this mod is that it hides the giant statues for the DLCs out of Gamlen’s house and gives them back to you in Act 2 — which makes way more sense storywise and appearance-wise, as Gamlen’s house has always felt a little too small for those big ol’ statues! 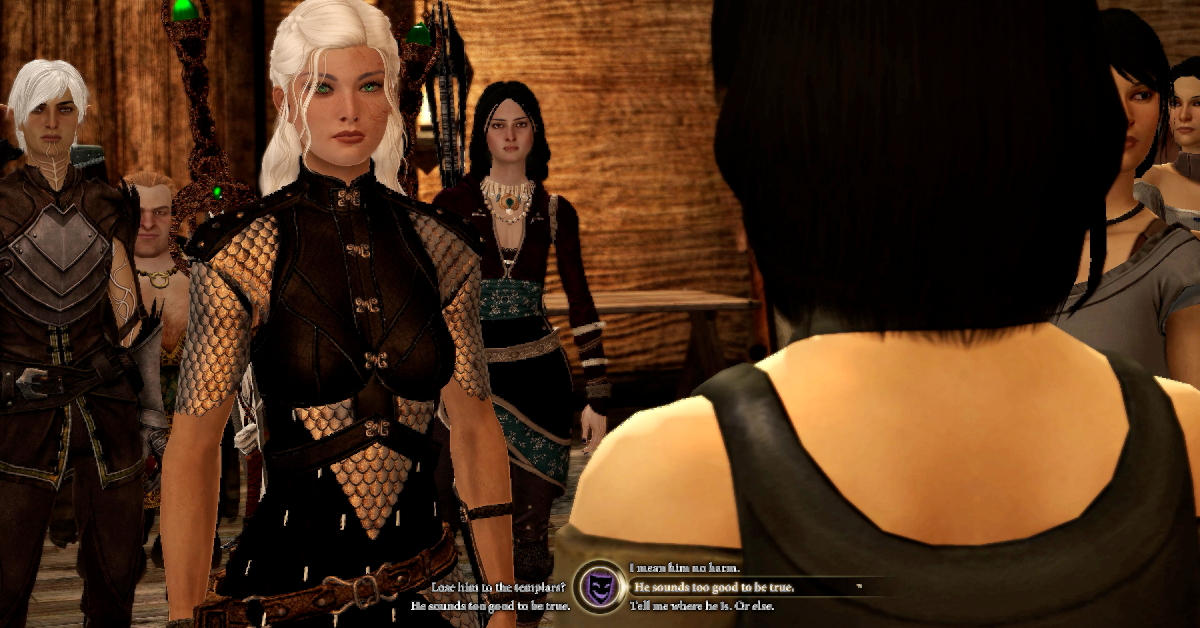 Saphhim’s Dialogue Mini Mod has a variety of mini-edits to the dialogue that you might want in your game — the best part is that it’s modular, so you only have to download which edits you want and can leave out the rest! I personally installed it for the line about Anders when talking to the lady to find him. It’s a sarcastic option — it’s a great sarcastic option even, and it makes me giggle. So therefore, it stays in the load order forever!

Reimagining is an HD Texture mod that, in my opinion, elevates the game and gives it a fresh, clean vibe. I’m a huge fan of the Mod Author’s other texture mod, Ultimate HD Pack, and this just feels like a sharper, more unique alternative of the OG mod — both are honestly fantastic options, so if you’re looking for a high res mod for DA2, checkout Reimagining. And, if that’s not to your liking, check out their other mod, Ultimate HD Pack!

I saved this mod for last because we’re going to be here for a minute — that’s right, we’re talking about Kirkwall Expanded. This is literally the ultimate “I didn’t know I needed it but I can’t live without it now” mod. It adds SO much to DA2 and makes it feel in part like a whole new game. You’ve got new NPCs, new merchants, new items, some new quests, house decorations, mercenaries and pets. YES, PETS.

Let me stop you right there and repeat — we’ve got pets. Two kinds actually — you can get either a combat style pet or a gatherer style one — you can only have one of them with you at a time and they’re summoned like your mabari. HOWEVER, the gatherer pets chill at your house. So you’ve literally just got the greatest little nug lounging at your house all the time. The merchants are a really nice addition.

I haven’t personally tried the quests yet but I am excited to stumble into them as I play through more of DA2. Also, with the additional merchants and things to do, Lowtown feels more lively, just like how I’d imagined it should feel in a lot of ways. Not to mention, it’s really nice seeing lady dwarfs socializing in Hightown!

Overall, if you’re looking for a new, fresh experience for DA2, this is the ultimate mod to get. Also, the mod author did a fantastic job laying out all the details on the mod description page, so I highly, highly suggest reading through it before installing!

There you have it, my favorite new mods for Dragon Age 2 — hopefully you found a mod or two to install in your game! And if you’re having any trouble installing mods, don’t forget to check out my how-to-mod DA2 tutorial!

You can also catch the full video on my YouTube Channel Here: